Nampa, Idaho - The God and Country Festival, an annual free concert and civic event held at the Idaho Center the Wednesday before the Fourth of July, will feature popular rock band Needtobreathe and singer/songwriter Meredith Andrews on June 30, 2010. The gates open at 5:00 pm for the 44th annual Festival, which will include a tribute to World War II Veterans and other military service members, speeches from local officials, and other musical artists.

The non-profit event, which is free to the public through the generosity of donors and sponsors, includes the largest fireworks show in the Treasure Valley, according to Carol Andrews, President of the all-volunteer Board.

"A lot of people ask us how we can put on such a major event that draws crowds of up to 14,000 people for free. While we will always keep it free to the public, we do depend heavily on businesses and churches advertising in our 11x17 supplement that goes out to over 22,000 subscribers to the Idaho Press-Tribune."

She says that the tabloid, which is scheduled to be delivered to newspaper readers on Sunday, June 27, is a great place to learn about the event's history and the volunteers behind the God and Country Festival. Visitors can learn more about attending or sponsoring the event at www.godandcountryfestival.com.

"This event started 44 years ago in part as a venue for the public expression of faith as protected by our Constitution. The Founders of our country were for the freedom of religion, not the freedom from it, and we're here to carry on that message."

Meredith Andrews, an accomplished artist on the national music scene, will help continue that tradition, performing her popular brand of Christian music at the event. Andrews has numerous hit songs, including "Can Anybody Hear Me" and "Never Move On."

The Festival is also helping to introduce the community to the heartfelt messages of local artists such as the Music Ministers Band, A Life Set Apart (www.myspace.com/alifesetapart), and Julie Turner (www.julieturnermusic.com).

Needtobreathe (www.needtobreathe.net/bio/) is an accomplished rock band that famously hails from Possum Kingdom, South Carolina. Their distinctly southern flavored style of music has been featured in popular movies and television shows, including The Hills, P.S. I Love You, ESPN, Fox Sports, and To Save a Life. The song "Stones Under Rushing Water" was recorded with Sara Watkins of the Grammy award winning group Nickel Creek, and other hit songs include "Something Beautiful," "Washed by the Water," and "Lay 'Em Down."

Meredith Andrews is a nationally acclaimed Christian artist with a heart for worship, family, and adoption. Andrews attended Liberty University where she majored in family and child development, and planned on working in an orphanage after graduation. She was born an only child, but her parents provided homes for many foster children. “We had about 20 kids come through our home in a period of about 10 years,” she recalls. “We ended up adopting three of the boys. They are my brothers now. I forget they are adopted.”

Just as God led Andrews to Liberty University then on to Harvest Bible Chapel, he opened doors in Nashville that led her to sign with Word Records. “I wasn’t really looking for a record deal. It just fell in my lap,” says Andrews. “I’m so humbled by it all. It’s obvious that it’s the Lord’s hand and not my own.”

About the God and Country Festival

The God and Country Festival is a free annual concert, fireworks show, and civic event celebrating religious freedom of expression and assembly in America, and honoring the men and women in the military who serve to protect that freedom.

We are thrilled to be able to announce our featured artist for 2010, Needtobreathe. These guys are incredibly unique and talented. Here's a link to the Needtobreathe Wikipedia page and their official website.

We're also thrilled to welcome the following Christian music artists to the 2009 Festival:

Note: The Idaho Center does not allow outside food or drinks to be brought in, but plenty of food and snacks are available at the concession stands. Also, no high-back chairs are allowed. Low-back beach chairs are allowed, blankets are allowed, and there are chairs and bleachers to sit on if you don't want to bring anything.

Want to support the Festival and keep it free? Please consider buying glow-sticks and contributing at the Festival or here on the website through PayPal. Thanks for your support and prayers for the success of this event!

Make your plans now for the 2009 God and Country Festival on Wednesday, July 1 at the Idaho Center. We are excited to have Brandon Heath and several local bands performing for this free family event. The fireworks show is the largest in the Treasure Valley, and is choreographed with patriotic and inspirational music! 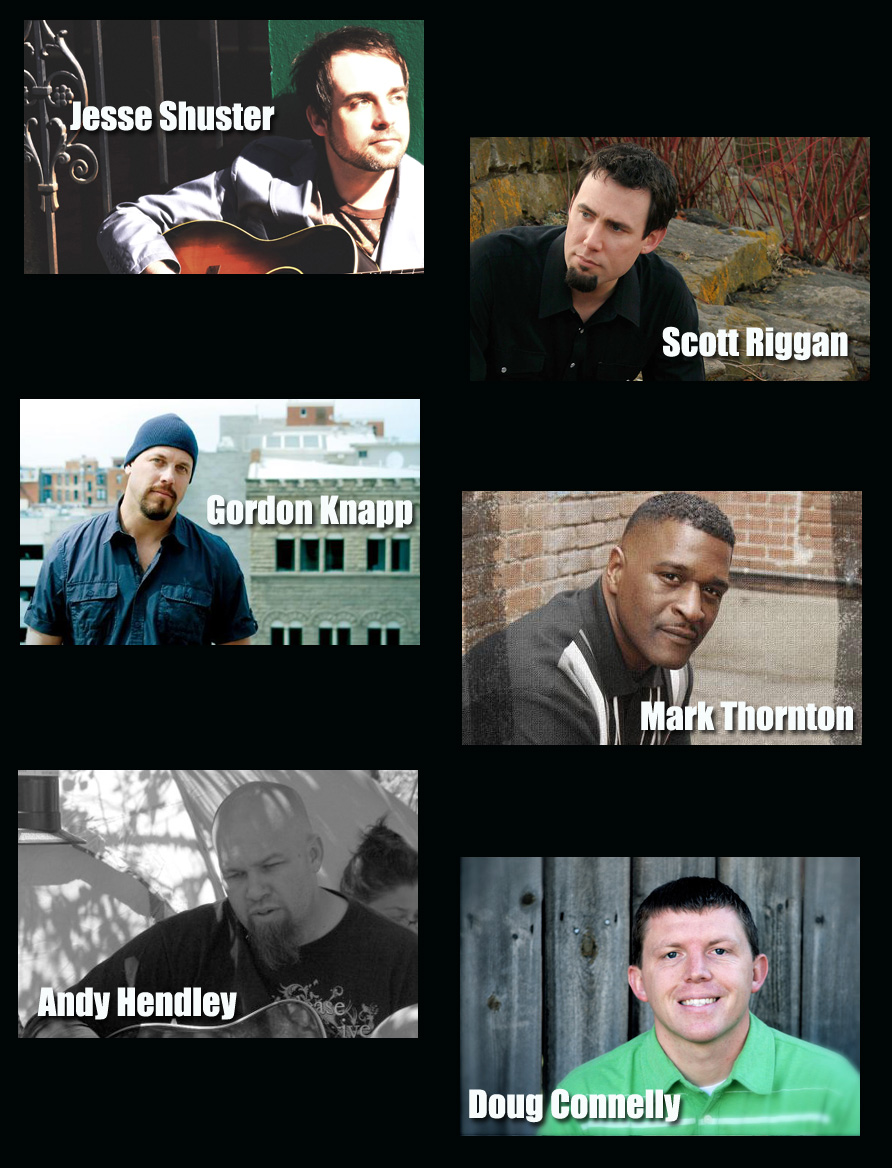 We're proud to feature another local band of accomplished musicians called Wasting Lament as an opening act. You can read more about Wasting Lament on their website.

We could use your help!

We are looking for business, church, and individual sponsors to keep this event going. The God and Country Festival is entirely volunteer-led, and is supported by donors and sponsors. Your support helps us bring great Christian music to the Treasure Valley and give much-needed publicity to the ministries that set up tables at the event free of charge.

The 38th annual event will provide many activities including featuring many of the individual ministries and services, which help the families of the Treasure Valley. Mayor Tom Dale will present the Annual Public Servant Award to a public employee for exemplary service to the community.

SONICFLOOD, a Christian worship band will be featured as the 2005 musical guest with a special free concert. They have just release their latest CD, This Generation, a follow-up to 2003’s Cry Holy; This Generation sees SONICFLOOD entering a new season that includes welcoming new players, a season that front-man Rick Heil hopes will lead people to a definitive understanding that God’s heart is truly good. It sounds obvious. After all, we learn about God’s goodness from our earliest days in Sunday school.

Mike Locknane Chairman of this year’s event said, “This event continues to grow and has become a genuine showcase for various ministries in the valley to present themselves to the God & Country audience as we continue to honor those serving our community through military service and positions in public service.” Sponsors have provided funding so we can continue to offer this event FREE of any admission charge.

The rally will again be held at the Idaho Center Amphitheater on Can-Ada Road in Nampa for the Wednesday, June 29, 2005 event (always the Wednesday before the 4th of July). Family activities begin at 6:00 PM, special presentations, speakers and public acknowledgments at 8:00 PM, and the full musical presentation beginning after the special presentations with the Treasure Valley’s best fireworks completing the evening at approximately 10:15 PM.

Brian Kohagen, Chairman of this year’s event said, “After the successful return of many of our troops from Iraq and all our Military on guard throughout the world we are again very excited to dedicate the 2004 event to our Veterans and public servants in Law Enforcement and Fire Departments. We have been working out the details and have many new and exciting features planned for this year’s event.”

The rally will again be held at the Idaho Center Amphitheater on Can-Ada Road in Nampa for the Wednesday, June 30, 2004 event. Family activities begin at 6:00 PM, special presentations, speakers and public acknowledgments at 8:00 PM, and the full musical presentation beginning after the special presentations with the Treasure Valley’s best fireworks completing the evening at approximately 10:15 PM.

THE GOD & COUNTRY FESTIVAL has a rich 37 year history which began when sixties western film star, Chuck Connors of the popular “Rifleman” television series helped launch such rallies across the nation. Godly men and women took up the challenge and continued the tradition in Nampa.

This is an old fashioned, patriotic and religious gathering with military, law enforcement and fire department vehicles on display, local musical groups from churches with the Gospel message at the center of the celebration. The emphasis is placed on the words and ideals of our nation’s Founders, and special recognition is given for those who serve in the military, both active-duty and veterans. Local public servants, especially law enforcement and emergency service personnel, are also honored.

The pyrotechnics expert behind the scenes at this years God and Country Rally is Lloyd Stubbs of Fireworks America. Special music is being produced with the patriotic flavor, which is programmed to the fireworks display.

The committee is now developing sponsors and donations to underwrite the costs of the event.

The Treasure Valley God & Country Committee is an independent, non-profit community organization. The rally is supported entirely by donations from local individuals, businesses, corporate sponsors, and an offering is taken at the event. There is no admission charge to attend.

June 30th 2021 is the current "Tentative Date".
Stay tuned to see when this year's festival will be, a few things are still in flux at the moment.

Main gates will open at 4:00pm. Of course, more info to be announced shortly.
Come early to make sure you get in, we're expecting BIG crowds.

The Idaho Center charges $5 per car so they can provide better traffic direction at time of exit and make needed improvements to the parking lot. If you have the DMV pass, you can get in for free.
Feel free to carpool!
'Congress shall make no law respecting an establishment of religion, or prohibiting the free exercise thereof; or abridging the freedom of speech, or of the press; or the right of the people peaceably to assemble, and to petition the Government for a redress of grievances.' ~The First Amendment
Copyright © 2018 - 2021 God and Country Association, Inc.
PO Box 995 | Nampa, ID 83655